A Tall History of Sugar 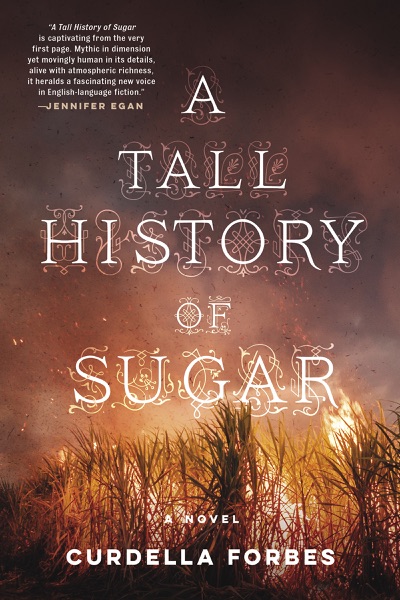 A haunting, epic Caribbean love story, reminiscent of García Márquez’s Love in the Time of Cholera.

WINNER of the 2020 Hurston/Wright Legacy Award for Fiction!

“A Tall History of Sugar is a gift for grown-up fans of fairy tales and those who love fiction that metes out hard and surprising truths. Forbes’s writing combines the gale-force imagination of Margaret Atwood with the lyrical pointillism of Toni Morrison.”
—New York Times Book Review, Editors’ Choice

“A mesmerizing love story that takes place over 50 years in Jamaica.”
—Tayari Jones in O, the Oprah Magazine

A Tall History of Sugar has been longlisted for the 2020 OCM Bocas Prize for Caribbean Literature (Fiction shortlist)!

“Curdella Forbes’s A Tall History of Sugar is the most recent in an impressive new wave of novels by Jamaican writers–from Marlon James’s Booker Prize–winning A Brief History of Seven Killings to Kei Miller’s Augustown, Marcia Douglas’s The Marvelous Equations of the Dread, and Nicole Dennis-Benn’s Patsy, among others. Forbes provides an eclectic, feverish vision of Jamaican ‘history’ from the 1950s to the present glimpsed through the experiences of an abandoned mystic-child named Moshe, whose translucent skin and mismatched eyes defy racial category. Who he is and who he becomes–like the country itself–is a riddle that unfolds in episodic bursts and linguistic flourishes.”
—Vanity Fair, one of the Best Books of 2019

“An epic tale of two soulmates: Moshe Fisher, born with mismatched eyes and pale skin that bruises easily, and Arrienne Christie, ‘her skin even at birth the color of the wettest molasses, with a purple tinge under the surface.’ Arrienne is his protector at school–and later his lover–but how they eventually wind up together is part of this unconventionally crafted story that spans decades, from the years before Jamaica’s independence to the 2010s. Forbes’ sentences are the stars here; it’s a book that rewards slow, careful reading.”
—BuzzFeed, included in BuzzFeed‘s Fall 2019 Preview

A Tall History of Sugar tells the story of Moshe Fisher, a man who was “born without skin,” so that no one is able to tell what race he belongs to; and Arrienne Christie, his quixotic soul mate who makes it her duty in life to protect Moshe from the social and emotional consequences of his strange appearance.

The narrative begins with Moshe’s birth in the late 1950s, four years before Jamaica’s independence from colonial rule, and ends in the era of what Forbes calls “the fall of empire,” the era of Brexit and Donald Trump. The historical trajectory layers but never overwhelms the scintillating love story as the pair fight to establish their own view of loving, against the moral force of the colonial “plantation” and its legacies that continue to affect their lives and the lives of those around them.

Written in lyrical, luminous prose that spans the range of Jamaican Englishes, this remarkable story follows the couple’s mysterious love affair from childhood to adulthood, from the haunted environs of rural Jamaica to the city of Kingston, and then to England–another haunted locale in Forbes’s rendition.

Following on the footsteps of Marlon James’s debut novel, John Crow’s Devil, which Akashic Books published in 2005, we are delighted to introduce another lion of Jamaican literature with the publication of A Tall History of Sugar.