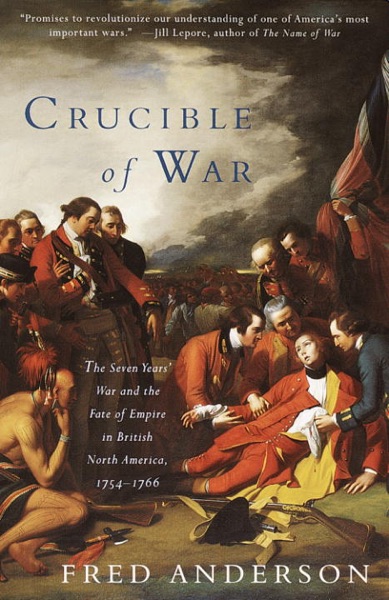 In this engrossing narrative of the great military conflagration of the mid-eighteenth century, Fred Anderson transports us into the maelstrom of international rivalries. With the Seven Years’ War, Great Britain decisively eliminated French power north of the Caribbean — and in the process destroyed an American diplomatic system in which Native Americans had long played a central, balancing role — permanently changing the political and cultural landscape of North America.

Anderson skillfully reveals the clash of inherited perceptions the war created when it gave thousands of American colonists their first experience of real Englishmen and introduced them to the British cultural and class system. We see colonists who assumed that they were partners in the empire encountering British officers who regarded them as subordinates and who treated them accordingly. This laid the groundwork in shared experience for a common view of the world, of the empire, and of the men who had once been their masters. Thus, Anderson shows, the war taught George Washington and other provincials profound emotional lessons, as well as giving them practical instruction in how to be soldiers.

Depicting the subsequent British efforts to reform the empire and American resistance — the riots of the Stamp Act crisis and the nearly simultaneous pan-Indian insurrection called Pontiac’s Rebellion — as postwar developments rather than as an anticipation of the national independence that no one knew lay ahead (or even desired), Anderson re-creates the perspectives through which contemporaries saw events unfold while they tried to preserve imperial relationships.

Interweaving stories of kings and imperial officers with those of Indians, traders, and the diverse colonial peoples, Anderson brings alive a chapter of our history that was shaped as much by individual choices and actions as by social, economic, and political forces.

Corals of Florida and the Caribbean

Under the walnut tree