England in the Seven Years War – Vol. I 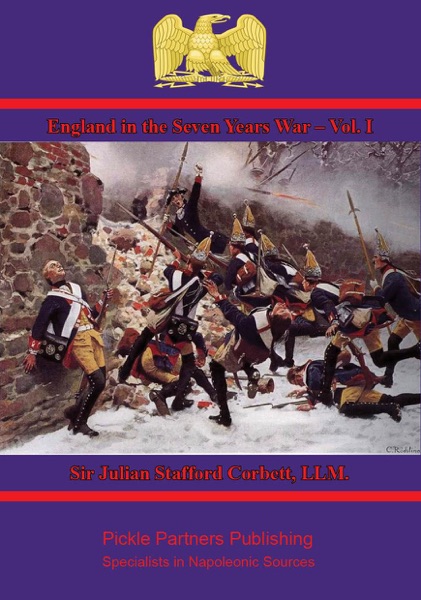 This ebook is purpose built and is proof-read and re-type set from the original to provide an outstanding experience of reflowing text for an ebook reader.
The Seven Years War (1756-1763) was one of the truly world-wide conflicts following the expansion of European colonies, with engagements spanning from India to Canada. As with so many of the European wars, the causes were a question of land and legitimacy. The ever-present simmering tensions between England and France, and the newly emergent Prussia and Austria, led to a conflict that dragged many other nations into the strife.
Notable in this war were the brilliance of Frederick, who would earn his title “the Great” during these wars, and the eclipse of Spain, Portugal and Sweden as powers of the first rank. However, the policy of England, that of Pitt, was to limit the commitment in terms of men; priority was given to the Royal Navy, and an indirect form of colonial warfare allied with blockade was established. The naval intricacies, along with their political and land-based military corollaries, are illuminated in Corbett’s two volume history of the English contribution to the Seven Years war.
This First volume in the series focusses on the actions to 1759, including the warfare in the Caribbean, around the French and German coast-lines, and the actions in and around Quebec, leading to that city’s capture.
Sir Julian S. Corbett was a prolific author and authority on British warfare and more particularly the naval aspects; he was also lecturer in history to the Royal Naval College.
Title – England in the Seven Years War – Vol. I
Sub-Title – A Study in Combined Strategy
Series Name – England in the Seven Years War
Series Number —1
Author — Sir Julian Stafford Corbett, LLM. (1854-1922)
Text taken, whole and complete, from the edition published in 1907, London, by Longmans, Green and Co.
Original – xi and 476 pages.
Illustrations – 10 maps and plans.