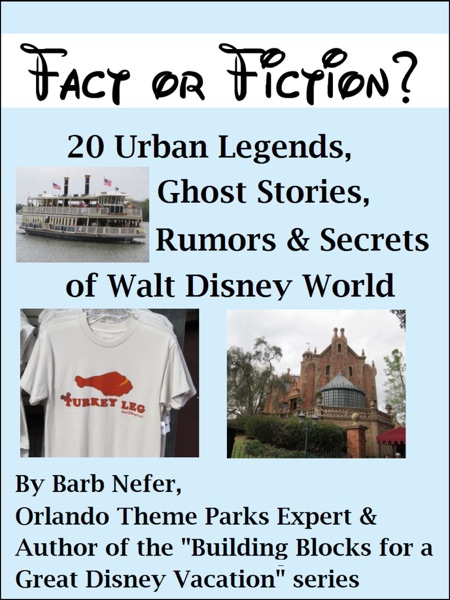 Walt Disney World is a legendary vacation destination, and it’s also a fertile ground for urban legends. Almost everyone has heard the tale of Walt Disney’s frozen head or his cryogenically preserved body or the story of the secret tunnels below the Magic Kingdom. Those are just two of the rumors that swirl around this Disney resort. Other stories involve ghosts in Pirates of the Caribbean, human ashes in the Haunted Mansion, emu legs being passed off as turkey, monorail expansions, abandoned island attractions, flashers on Splash Mountain, a pop-apart Cinderella Castle, and the fate of the long-defunct Plaza Swan Boats that used to ferry passengers in the Magic Kingdom.

Are these stories true or false? Find out in “Fact or Fiction? 20 Urban Legends, Ghost Stories, Rumors & Secrets of Walt Disney World.” This book examines 20 of the most common Disney rumors, as well as some related myths, and gives the truth behind the tale. It’s packed with informative supporting links if you want to confirm the information and learn even more Disney World facts and trivia.