From Ellis Island to JFK 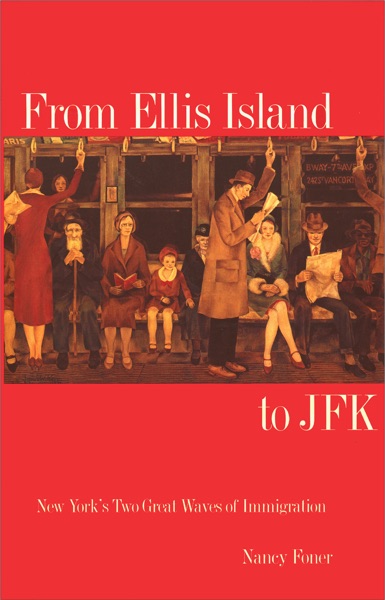 In the history, the very personality, of New York City, few events loom larger than the wave of immigration at the turn of the last century. Today a similar influx of new immigrants is transforming the city again. Better than one in three New Yorkers is now an immigrant. From Ellis Island to JFK is the first in-depth study that compares these two huge social changes.

A key contribution of this book is Nancy Foner’s reassessment of the myths that have grown up around the earlier Jewish and Italian immigration—and that deeply color how today’s Asian, Latin American, and Caribbean arrivals are seen. Topic by topic, she reveals the often surprising realities of both immigrations. For example:

• Education: Most Jews, despite the myth, were not exceptional students at first, while many immigrant children today do remarkably well.

• Jobs: Immigrants of both eras came with more skills than is popularly supposed. Some today come off the plane with advanced degrees and capital to start new businesses.

• Neighborhoods: Ethnic enclaves are still with us but they’re no longer always slums—today’s new immigrants are reviving many neighborhoods and some are moving to middle-class suburbs.

• Gender: For married women a century ago, immigration often, surprisingly, meant less opportunity to work outside the home. Today, it’s just the opposite.

• Race: We see Jews and Italians as whites today, but to turn-of-the-century scholars they were members of different, alien races. Immigrants today appear more racially diverse—but some (particularly Asians) may be changing the boundaries of current racial categories.

Drawing on a wealth of historical and contemporary research and written in a lively and entertaining style, the book opens a new chapter in the study of immigration—and the story of the nation’s gateway city.