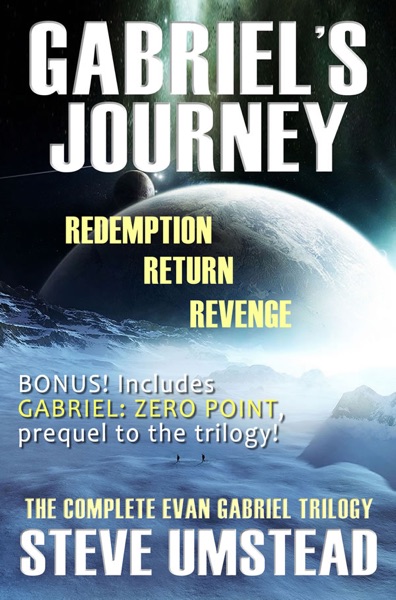 THE COMPLETE EVAN GABRIEL TRILOGY IN ONE VOLUME

Follow North American Federation Navy Commander Evan Gabriel as he crosses the galaxy searching for Redemption, Returns to where it all began, then finally seeks Revenge on those responsible.

From the decaying Caribbean to politically-charged South America, from the slums of Mars to a tiny colony on a planet six hundred light years from Earth, Gabriel’s Redemption follows the disgraced Commander Gabriel as he leads a Special Forces team to an ice-bound world. Their given mission: to eradicate a drug cartel that is producing a highly-addictive stimulant brutally extracted from the bodies of the native inhabitants. Upon arriving, Gabriel and his team find the mission isn’t exactly what it appeared to be, and that they weren’t the only force dispatched to the planet.

In Gabriel’s Return, Commander Gabriel is being called away on a new mission by a friend in trouble, and by a name from his distant past. He and his surviving team must again travel across the galaxy to the planet where he lost his naval command, and his original team, so many years ago: Eden. Gabriel must face three distinct threats on Eden: the well-armed terrorist group that has been raiding Eden City, the dangerous planet itself, and his own haunting memories of his past.

In Gabriel’s Revenge, Gabriel is returning from a mission on the far-off world of Eden, and finds that Mars is in a state of political upheaval. Two major dome cities are now under the control of ambitious and ruthless men backed by the scheming South American Republic. Friends are in trouble and the future of a world is in flux while rival governments bicker behind closed doors. From the ice-bound planet of Poliahu, to the dangerous jungle world of Eden, and back to his adopted home of Mars, Evan Gabriel has witnessed death follow him. Now, he’s turning the tables, and no force would stand in his way.

Reviews:
“The action in this series rocks, complete with super-cool weapons and technology. Umstead takes a complex cast and gives them each a distinct personality that makes the team dynamic just great.” – Leah Petersen, author of science fiction Fighting Gravity

“Umstead has created what I can only describe as a Tom Clancy-esque world a few hundred years into the future.” – W.E. Linde, author of fantasy The Prince of Graves