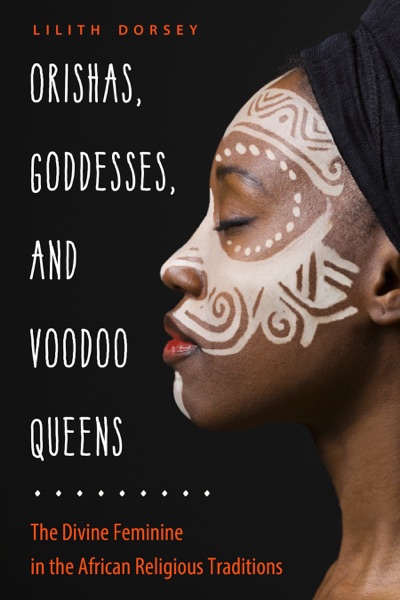 An inspiring exploration of the goddesses of the West African spiritual traditions and their role in shaping Yoruba (Ifa), Santeria, Haitian Vodoun, and New Orleans Voodoo.

Throughout Africa and beyond in the diaspora caused by the slave trade, the divine feminine was revered in the forms of goddesses like the ancient Nana Buluku, water spirits like Yemaya, Oshun, and Mami Wata, and the warrior Oya. The power of these goddesses and spirit beings has taken root in the West. New Orleans, for example, is the home of Marie Laveau, who used her magical powers to become the “Voodoo Queen” of New Orleans.

Orishas, Goddesses, and Voodoo Queens shows you how to celebrate and cultivate the traits of these goddesses, drawing upon their strengths to empower your own life. In addition to offering a guided tour of the key goddesses of the African religious traditions, the book offers magical spells, rituals, potions, astrological correspondences, sacred offerings, and much more to help guide you on your own transformational journey.

“For the African diaspora, religion didn’t begin with the colonial imposing of Christianity. Writer, editor, and filmmaker Lilith Dorsey argues that African cultures celebrated the “divine feminine,” including Nana Buluku, Oshun, Mami Wata, and Yemaya before the Transatlantic slave trade disrupted everything. In Orishas, Goddesses, and Voodoo Queens, Dorsey traces ancestral practices from their origins to our current moment using rigorous historical research as well as her own understanding of magical spells, rituals, and potions. Beware: Transformational journeys, like the ones Dorsey presents in this book, shouldn’t be taken lightly or in jest. This is only a book for those who will take these cultures and practices seriously.” –Bitch Media

“Lilith Dorsey opens the door and shines a light upon the world of African Traditional Religions and their magnificent deities of the Divine Feminine. Her exceptional storytelling, delicious recipes, offerings, and appendixes give the reader instant access for working properly and respectfully with the orishas, goddesses and Voodoo queens who are frequently misunderstood or misinterpreted. This book is a must-have for anyone seeking practical and authentic knowledge on how to begin their journey into the multifaceted worlds of African Traditional Religions. I truly enjoyed it. It is a fantastic read and a book I shall return to many times. Ayibobo!” –Najah Lightfoot, author of Good Juju: Mojos, Rites, & Practices for the Magical Soul

“In Orishas, Goddesses, and Voodoo Queens, Lilith Dorsey takes readers on an exploratory journey of a beautiful religious current, examining its history, evolution, and even its most complex and uncomfortable aspects, such as slavery, syncretism, and cultural prejudices. The book also includes the most curious recipes and interesting anecdotes, all summed up in one accessible read.” —Elhoim Leafar, author of The Magical Art of Crafting Charm Bags.

“Lilith Dorsey writes from her heart and from the heart of her devoted service as a priestess of the Divine Feminine. While she encourages her readers to seek a “House” and trustworthy mentor with whom to seek initiation, she also gives clear instructions and suggestions for ritual practices that anyone can use to experience these beautiful African goddesses and spirits. I’m sure her words will inspire new generations of seekers and priestesses who are exploring their own paths to spirituality.”—Sallie Ann Glassman, author of Vodou Visions: An Encounter with Divine Mystery.

“In Orishas, Goddesses and Voodoo Queens, Lilith Dorsey has created a long-overdue, welcome, and helpful guide for all of those interested in goddess, lwa and orisha work. . . This book not only aids in the understanding of the Divinely Feminine of the Motherland and African Diaspora, but it also helps us interact through herbal connections, rituals, altars, prayers and invocations, storytelling, special food recipes, and so much more”  -Stephanie Rose Bird, author of Sticks, Stones, Roots and Bones

“Applying what resonates most with self on one’s spiritual journey is what has worked for me over the years. Lilith Dorsey has created a divine companion Orishas, Goddesses, and Voodoo Queens for seekers to turn to in their practices. Dive into this treasure chest of a book and learn various gems including spells, rituals, and incantations.” — Riva Nyri Précil, artist, dancer, songstress, and author of Anaëlle ak Lasirèn.

“Orishas, Goddesses and Voodoo Queens is a practical guide for working with the energies of the divine feminine in a way that taps into an ancient well of mysteries while remaining accessible to all. I highly recommend Lilith Dorsey’s Orishas, Goddesses and Voodoo Queens for anyone who is interested in the stories and backgrounds of these spirits, for anyone who wishes to work with them through ritual and divination, and for all those looking to honor  and amplify the sacred and divine feminine energy within themselves. —Denise Alvarado, author of The Magic of Marie Laveau and The Voodoo Hoodoo Spellbook

“Orishas, Goddesses and Voodoo Queens is a one of a kind book and a must-have, a truly unique piece of work that has arrived at a crucial time.” –Witchdoctor Utu, author of Conjuring Harriet “Mama Moses” Tubman and the Spirits of the Underground Railroad.

Lilith Dorsey, MA, hails from many magickal traditions, including Celtic, Afro-Caribbean, and Native American spirituality. Her traditional education focused on plant science, anthropology, and film at the University of Rhode Island, New York University, and the University of London, and her magickal training includes numerous initiations in Santeria, also known as Lucumi, Haitian Vodoun, and New Orleans Voodoo. She has been a professional psychic for over three decades. Lilith is a frequent presenter at festivals and gatherings, including the Sirius Rising Festival, Sankofa Fest, New York City’s Pagan Pride Day, and the Earth Warriors Festival. She is a regular guest on several Pagan blogtalk radio shows.

The Cooking of History

Dead in the Water