Promoting Healthy Living in Latin America and the Caribbean 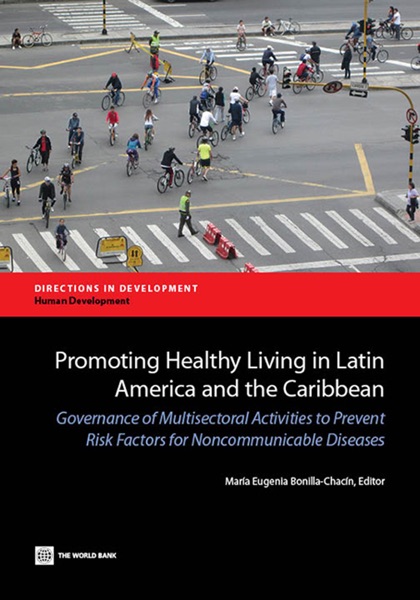 The Latin American and Caribbean region has been undergoing a rapid demographic and epidemiological
transition, which has had important health and economic consequences. Not only is the population aging
rapidly, it is also experiencing major lifestyle changes. These changes, in turn, have altered the disease and
mortality profile of the region, resulting in a greater weight of noncommunicable diseases—such as heart
disease, stroke, cancer, and diabetes—within the overall disease burden. As they affect more and more people,
noncommunicable diseases pose a growing economic and development threat to households, health systems,
and economies.
Part of this health and economic burden can be avoided, however. An important share of such diseases is
attributable to preventable risk factors, such as an unhealthy diet, physical inactivity, tobacco use, and alcohol
abuse—the leading health risk factors in most of the region. This book outlines the design and implementation
of policies that would promote healthy living in the region, thus effectively preventing premature mortality
from noncommunicable diseases.
Reducing the exposure to these risks factors at the society level requires the concerted effort of stakeholders
from a variety of sectors; therefore, the decision-making process presents challenges to policy makers and
other health advocates. International experience has shown that overcoming these challenges often requires
negotiation and dialogue among all interested parties, the mobilization of public opinion, reliance on
information and research, the leadership and political commitment of key political figures, and institutional
arrangements that favor multisectoral coordination and take advantage of favorable conditions, among others.
Promoting Healthy Living in Latin America and the Caribbean reviews the design and implementation processes
of several successful or promising international examples as well as some regional ones; specifically, the
agreement between the government and industry to reduce sodium in processed foods and to reform the
Food Code to reduce trans fats in Argentina; a built environment that promotes physical activity in Bogotá,
Colombia; the National Agreements for Food Health in Mexico; and the tobacco-control policies in Uruguay.

A New Voyage Round the World

Freedom, Festivals and Caste in Trinidad After Slavery