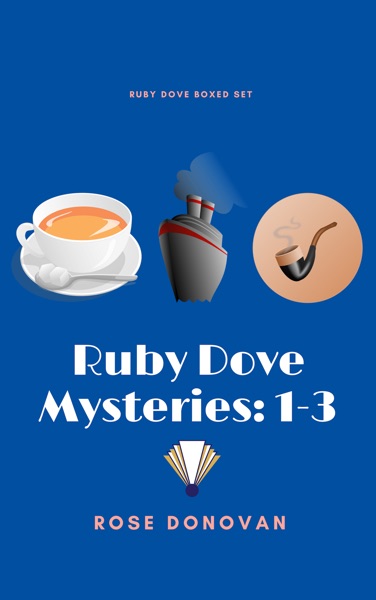 What readers are saying:
“Kept you guessing right until the very end.”
“A delightful cozy mystery.”
“Well worth 5 stars.”
“Lovely vintage mystery.”
“Perfect” because it’s a rare murder mystery that I don’t figure out the identity of the perp long before the reveal.”
“Smart, vivid and fun.”
“Cozy with an edge.”
“Definitely keeping an eye out for the next in the series!”

Book 1: The Mystery of Ruby’s Sugar
A locked room. A secret letter. A weekend to solve a murder.

The snow lies heavy around Pauncefort Hall. Dress designers Ruby Dove and Fina Aubrey-Havelock leave behind their Oxford exams to rescue Lady Charlotte’s wardrobe. But what Lady Charlotte doesn’t know is that Ruby is on a mission—a mission to avenge her family and bring down an empire.

As the weather worsens, Ruby and Fina are drawn into the intrigues of Lady Charlotte’s other guests, who include a princess, a furiously left-wing don, a West End starlet—and, it seems, a murderer. After the two resident cads are poisoned, Ruby and Fina must find the culprit and still carry out their secret plans—all before the law arrives. But Pauncefort Hall can remain snowbound for only so long.

Book 2: The Mystery of Ruby’s Port

A ship full of suspects awaits Ruby and Fina. Will they find the murderer before their own secrets are revealed?

Cruising to disaster, Ruby Dove and Fina Aubrey-Havelock face down a murderer who is slowly crossing names off the passenger list.

As the SS Sanguine sets sail from the Bahamas, Ruby and Fina eagerly await the excitement promised once they dock in Trinidad. Ruby pays her way as an apprentice to a French designer and Fina tags along as a governess to a wealthy widow’s son. Ruby’s brother has also asked them to find a secret contact on board. Which passengers are genuinely eccentric and which are covering their true intentions?

Soon they have two mysteries on their hands…their contact and a killer.

In a race against time, Ruby and Fina are thwarted by stormy seas, subversive stewards, sordid scandals, salacious seances, scary scorpions and suspicious swine. They know all too well how many lives hang in the balance should they fail both their missions.

Passing exams is the least of Ruby and Fina’s worries as they return to their beloved Quenby College. A thief lurks amongst the students and faculty, and when an infamous guest lecturer keels over at the Dean’s sherry party, Fina is shocked to find herself the prime suspect.

Determined to clear her friend’s name, Ruby launches into a hunt for a murderer that takes her to secret college boltholes, dubious pawnshops, and a red-hot jazz club. At least she has allies she can trust – until a coded letter arrives, warning Ruby and Fina that one of their friends is not what they seem…

Will the pair evade the spy and find the killer in time to save Fina from the gallows?