The Art of Caribbean Baking Cookbook 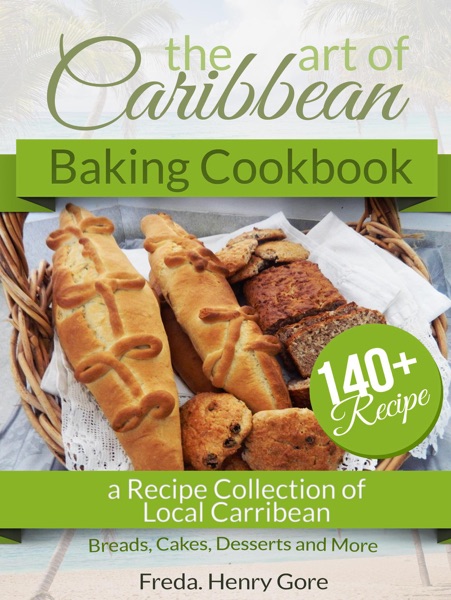 Freda Gore is no stranger to the art of Caribbean Baking having grown up on the island of Dominica. In a family where she remembered everything that surrounded her parent’s local bakery. When Freda was a girl the family bakery was her playground and she grew up making her own childish concoctions from leftover dough and cake batters. When most of her friends used their weekends and holidays to hang out with friends, she spent her time in the family business with her parents, helping to bush bread, greasing the cake pans, mixing the cake batters and grating coconut which would later be made into coconut drops and tarts. By the age of seven Freda was her father’s shadow, trailing him as he catered and baked for local weddings, bazaars and church functions. As a teenager, the family relocated and moved the business to the neighboring island of Antigua. She continued working alongside her family in the bakery. Growing older and stronger she now helped in hand-mixing of flour and bun doughs, mixing batters for the rum cakes and making the coconut tarts, biscuits and breads. However, there were times when she felt cheated from the fun her friends were having since she was unable to go to parties, the beach or the local carnival celebration and at times she resented the business. And to make matter worse, some of her friends nicknamed her the “Flour Weevil”. However, her family encouraged her and it seemed that Freda was destined to go into the family business and after high school graduation she attended the local hotel school, where she studied cooking and baking arts. Fate had its way with leading her in a different direction due to her early knowledge of baking and her academics. At the end of her 12 months training she was offered a scholarship by the local rotary club to attend the Cornell University school of Hospitality training. At the end of the training she was recruited by the school as their culinary arts instructor. A position she held for 15 years.

Freda continued her passion for baking and the cooking arts and on relocation to South Florida, she launched her Catering Service “Silver Palate Catering and Personal Chef Service”, where she placed great emphasis in incorporating her local island ingredients into her menu planning. Now, as the tour host for Caribbean Culinary Tours, she traveled to different islands where you can find her scouting out the local farmers markets, bakeries or street vendors. “Writing this book has truly been a baking adventure for me and I am passionate about my Caribbean baking heritage” says Freda. International tourism has such a strong influence in the Caribbean and some of the local chefs are doing great things with incorporating other international ingredients to the locally grown foods. However, the art of authentic Caribbean baking will soon be lost if we don’t preserve it for future generation. Chef Freda hopes that the result of writing “The Art of Caribbean Baking” will help to preserve the local baking recipes and culture of the Caribbean islands.

The Admiral and the General.