The Battle Against the U-Boat in the American Theater: Army Air Forces Antisubmarine Campaign, Adversaries in the Battle of the Atlantic, Caribbean, Wolfpacks, Milch Cows, Bell P-39, Northrup A-17 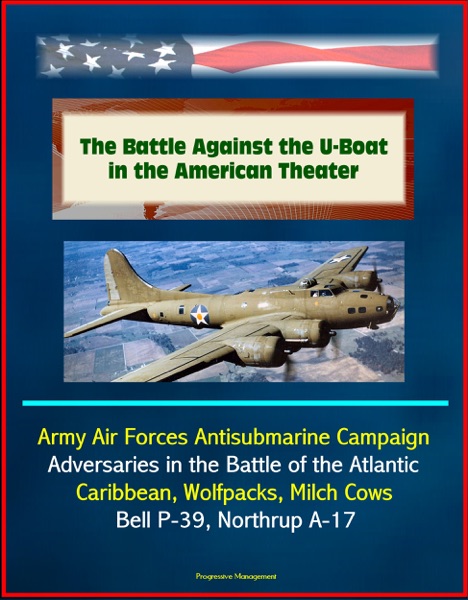 Professionally converted for accurate flowing-text e-book format reproduction, this unique USAF publication describes the Army Air Forces’ contribution to the Battle of the Atlantic from the American Theater. In 1942 the Allied powers faced the most serious challenge to their control of the seas encountered in the Second World War: the menace of the U-boat. Fast, well-armed, and long-ranged, Hitler’s submarines attacked shipping throughout the North Atlantic, often within sight of America’s coastal towns and cities. Eventually, the combination of intelligence, land and sea-based air power, and surface vessel operations from both North American and British bases ended this threat, making possible the Allied build-up for the invasion of Europe in 1944.

Flying radar-equipped long-range patrol planes, AAF airmen demonstrated the value of land-based air power against naval threats. This success has been reaffirmed consistently since the Second World War, from Vietnam and crises such as the Mayaguez incident to operations in Desert Shield and Desert Storm. The Harpoon-armed B-52s of our present-day global Air Force are the heirs of a sea-control tradition dating to the AAF’s A-29s and B-24s of the Second World War.

By 1941, the German submarine offensive against Allied shipping in the Atlantic threatened to starve Great Britain. Like Japan, she was dependent on ocean-borne commerce to sustain her economy and defend herself. The British population depended on imports for a third of its food and for oil from North America and Venezuela to sustain its lifeblood, but German submarines in 1940 and 1941 were sinking merchant ships and tankers faster than the British could replace them. Consequently, the United States gradually undertook a greater role in the campaign that British Prime Minister Winston Churchill named the Battle of the Atlantic. In September 1941, the U.S. Navy began to escort convoys in the western part of the North Atlantic. Within a month, a German submarine attacked a U.S. destroyer escorting a convoy near Iceland, leaving several sailors dead or wounded. On October 31, a German submarine sank a U.S. destroyer six hundred miles west of Ireland, killing 115 of the crew.
Despite this loss of life, events in the Far East rather than in Europe pushed the United States into World War II. By July 1941, Japanese forces had occupied French Indochina, and U.S. economic sanctions had cut off much of Japan’s oil and other imported resources. In October, the Japanese government decided on war, even as it negotiated with the United States. Japanese military leaders hoped to strike a blow that would paralyze the U.S. fleet in Hawaii long enough to establish a defensive ring from Southeast Asia through the East Indies and eastward in the Pacific as far as Wake Island. This strategic plan would have provided Japan with unlimited access to the rich resources of Southeast Asia. As the opening stage of this plan, a Japanese aircraft-carrier task force attacked the American naval base at Pearl Harbor and nearby facilities in Hawaii on December 7, 1941.