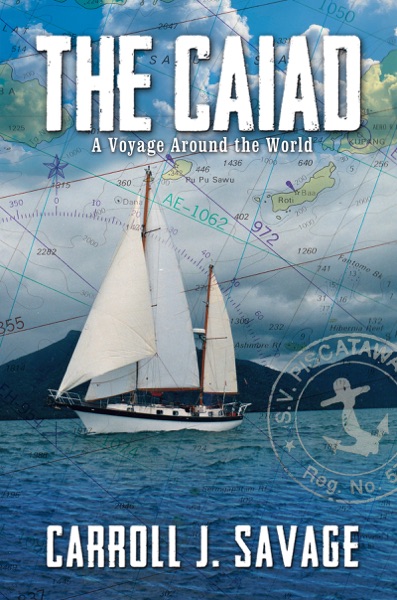 "The Caiad" is an account of a decade-long around-the-world voyage in a sailboat undertaken in his fifties by a novice sailor who takes his family with him and learns along the way about boats, sailing and the sea, as well as about himself. As he “learns the ropes” amid many embarrassing and potentially dangerous errors caused by his inexperience, and as he survives exhausting and terrifying trials at sea, Caius, who grew up as a shy child and became a tentative, irresolute and insensitive adult, gains confidence and self-respect, gradually achieving a softer and more observant and sympathetic nature and ultimately a composure and tranquility that had eluded him most of his life. Interspersed with harrowing events—storms at sea, a tear-gassing by Noriega’s Doberman Police in Panama, a broken rudder cable in the Pacific Ocean 1,500 miles from the nearest land, a mutinous crew in Fiji, a brush with piracy in the Indian Ocean, and an arduous passage during the Gulf War through the hostile waters of the Middle East where the boat is fired upon by a Sudanese military unit—are idyllic cruises along the Caribbean island chains, inside Australia’s Great Barrier Reef, through the mysterious islands of Indonesia, and among the antiquities and Old World charms of the Mediterranean. Alone at the helm at night in the middle of the great oceans the author reminisces about his past and muses about life, science, religion, quantum mechanics, cosmology, and the nature of time, infinity and mortality. This is a work as expansive and the oceans it traverses, a story not just for sailors and armchair sailors, but for all dreamers who would like to set out on their own to experience the world but do not know how to start or are afraid to let go the dock lines of their society and careers.