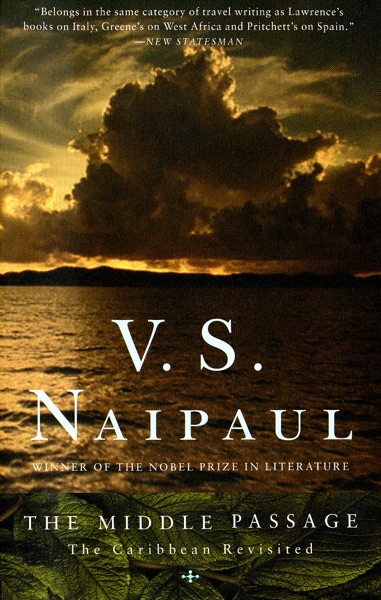 In 1960 the government of Trinidad invited V. S. Naipaul to revisit his native country and record his impressions. In this classic of modern travel writing he has created a deft and remarkably prescient portrait of Trinidad and four adjacent Caribbean societies–countries haunted by the legacies of slavery and colonialism and so thoroughly defined by the norms of Empire that they can scarcely believe that the Empire is ending.
In The Middle Passage, Naipaul watches a Trinidadian movie audience greeting Humphrey Bogart’s appearance with cries of “That is man!” He ventures into a Trinidad slum so insalubrious that the locals call it the Gaza Strip. He follows a racially charged election campaign in British Guiana (now Guyana) and marvels at the Gallic pretension of Martinique society, which maintains the fiction that its roads are extensions of France’s routes nationales. And throughout he relates the ghastly episodes of the region’s colonial past and shows how they continue to inform its language, politics, and values. The result is a work of novelistic vividness and dazzling perspicacity that displays Naipaul at the peak of his powers.