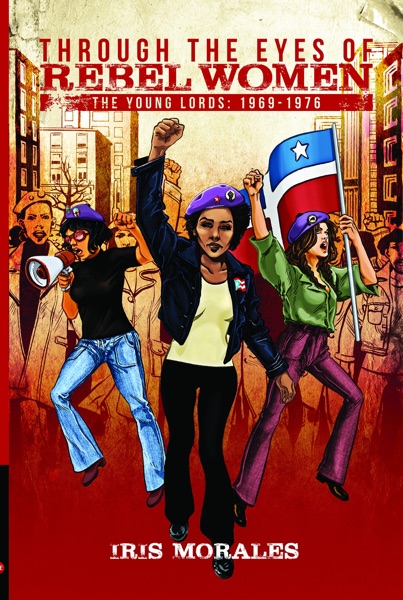 THROUGH THE EYES OF REBEL WOMEN: The Young Lords, 1969-1976 is the first account of women members — a “story within a story” told from the inside out. The Young Lords Organization emerged in the late sixties to fight poverty, racial and gender inequality, and the colonial status of Puerto Rico. Women joined to build a people’s movement for justice and fought the “revolution within the revolution” believing that women’s equality was inseparable from the society’s progress as a whole.

Written and edited by Iris Morales, THROUGH THE EYES OF REBEL WOMEN consists of essays, interviews, and primary source documents. Morales chronicles the revolutionary rise of the Young Lords, the role and contributions of women, the opening of branches in Puerto Rico, and the group’s demise.

Personal interviews with former women members captured for the film ¡Palante, Siempre Palante! The Young Lords have been edited for the book. Photographs and articles from the early 1970s complete the narrative. The entire volume affirms that social movements do not develop in a vacuum but arise to spearhead solutions to the injustices occurring in society.

Dr. Edna Acosta-Belén, distinguished historian and women’s studies scholar, writes: “These women activists are … the brave feminist warriors who battled for equality in intersecting (not isolated or separated) arenas of class, race, gender, ethnicity, and sexuality; part of that noble league of defenders of universal human rights.”

Ericka Huggins, human rights activist, former Black Panther Party member and political prisoner, summarizes: “As I read this book, I was continually inspired by the history of the Young Lords and the great women within it. Iris Morales writes a story that parallels the story of the women in the Black Panther Party and women throughout the globe. The structural and interpersonal work we must do to uplift humanity always starts from the inside out!”

Through the Eyes of Rebel Women is a must-read for everyone interested in the Puerto Rican and US grassroots social movements of the 1960s and 70s in the United States.

About the Author and Editor
Iris Morales is an educator and lifelong community activist. She brings her legacy of social justice activism to her projects with young people, teachers, and media producers promoting human rights and the decolonization of Puerto Rico. For thirty years, Ms. Morales has built organizations dedicated to grassroots organizing, community empowerment, and media. As the founder and editor of Red Sugarcane Press, she publishes books about the Puerto Rican and Latin@ Diasporas in the Americas.

Ms. Morales was a member of the Young Lords for five years serving as Deputy Minister of Education and a co-founder of its Women’s Caucus and Women’s Union. Her interviews and writings about the Young Lords have appeared in numerous books and magazines. She is also the writer, producer, and co-director of the award-winning film, ¡Palante, Siempre Palante! The Young Lords, which premiered on public television and continues to screen across the United States and the Caribbean.

Ms. Morales travels nationally as a public speaker at colleges, universities, and community venues. She is an attorney, a graduate of New York University School of Law, and earned an MFA in Integrated Media Arts from Hunter College in New York.