Time To Put Your Boots On Girl 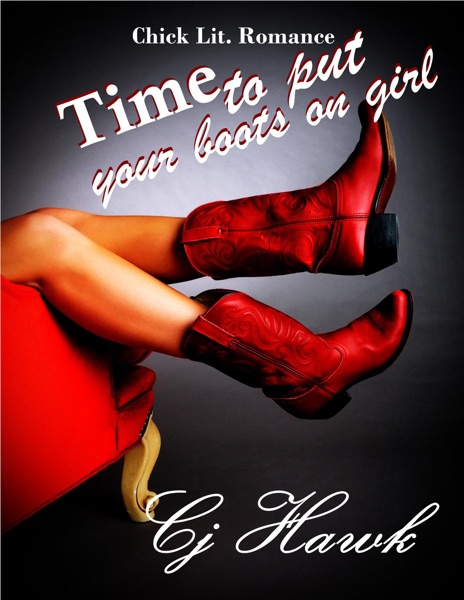 Chick Lit with a light romance. Caribbean bound with her best friend until a sip of bad luck makes everything go foggy and dark. Next thing Katy Beck knows is that either her best friend is playing a bad joke or she just stole her husband, her money and her looks. To make things worse she just left her on the porch of an old run down shack in the middle of a mountain with only her beach bound attire.
Katy had a way of making the worse seem better and maybe a good guardian angel or two. As luck would have it, she was plopped right in the lap of one very hot war hero and famous journalist. But life isn’t always as easy as it seems and Katy wants to make sure she offers more back in her life then a set of DD’s and a pretty smile.
With every trick of the trade, Sabrina had left a trail of misery for Katy. However, that is nothing a good sense of humor and new good friends can’t take care of. Plus a little shiny thing called gold doesn’t hurt either.

Book Inserts:
I was beyond confused. My first thought was that maybe Haus had kidnapped my best friend and me, while holding us for ransom.
—
As if lightening had crackled in the air, Sabrina turned and looked at me in a very devilish grin and let out the most evil laughter. “I have waited, patiently mind you, for this very day. You, my dear, are out. I am in where I belong. Mathew was mine from the beginning but you stole him from me. Now I have him back. You will no longer be Mrs. Mathew Rhinholt. You are now just plain Katy Beck, or you can still go by Klarissa, if you choose.” The evil laughter left her lips again.
—
I froze with a plastered smile on my face as I watched the black Range Rover slowly back up next to me. Then in what seemed an even slower pace was watching the passenger window lower down. Who was driving the car was not what I expected. I wasn’t really sure what to expect. Maybe some dangerously looking, mountain man with a hidden knife to dice me up with next to his seat.
“Need a lift?” His voice was smooth and deep. His eyes hid behind very expensive sunglasses while his jaw was chiseled in a tense motion and his mouth was set in a straight line. He had one hand draped across the black leather steering wheel and another down by his side. ‘Serial murderers come in all shapes and sizes.’ My inner scared cat voice squeaked in my head. While the sexual part of me imagined what lied behind those sunglasses and underneath the pricey tee shirt he was wearing. As if he read my mind, he raised his glasses to his head and attempted a smile. “Mike Smith. I believe we are neighbors.”
—-
My resolve melted quickly and I was kissing him back harder with my hands on his back holding him as close as I could and my tongue dipping deeply into ever space of his mouth. We both pulled away and breathed deep. I looked down out of fear of looking into his eyes. He breathed into the top of my head then spoke softly. “You’re not alone in this.”
—-
“The thing is girl with what you’ve been through it’s time you put those fancy heels of yours away. It’s time to put your boots on girl.” I watched her start to tear into the boxes. I was at a loss for words. She had a point. It was time for me to take charge of my life and worry about getting me settled and on track. It wasn’t time for me to dwell in a new romantic situation since I had just been dumped just days ago. After a moment or two passed I smiled watching Edna just buckle down and get to work.