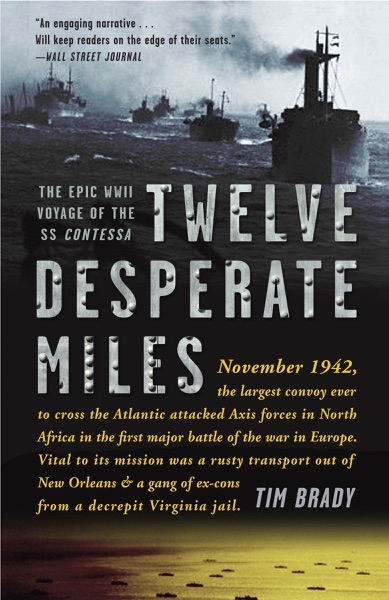 The Dirty Dozen meets Band of Brothers in this true story of how a rusty old New Orleans banana boat staffed with an unlikely crew of international merchant seamen, a gang of inmates from a local jail, and a French harbor pilot spirited out of Morocco by O.S.S. agents in the trunk of a Chevy, were drafted into service in WWII — and heroically succeeded in setting the stage for Patton’s epic invasion of North Africa.

The largest amphibious invasion force ever to cross the Atlantic Ocean set sail from Virginia for North Africa in November 1942.  Operation Torch was the true beginning of the liberation of Europe since control of Northwestern Africa — Morocco, Algeria, and Tunisia — gave the Allies a base on the Mediterranean for the coming invasion of southern Europe.  The prime objectives of the Moroccan invasion, headed by General George Patton, were the port city of Casablanca and an airfield 60 miles northeast of the city, which had the only concrete runways in the region.  Unfortunately, the field was located a dozen miles up a shallow, twisting Moroccan river that wound its way down from the Atlas Mountains to the Atlantic.  Patton needed five hundred tons of highly volatile airplane fuel and nine hundred tons of bombs delivered to that Moroccan airport to supply his planned air campaign against Casablanca, but he faced a major challenge: the river was too shallow for any available transport ship in the entire Allied fleet.  As the clock ticked down on the invasion, the War Department searched every harbor and cove in the Atlantic and only at the last moment turned up the Contessa, a salt-caked, rust-stained Honduran-registered civilian freighter that had spent most of her undistinguished career hauling bananas and honeymooners from New Orleans to the river port harbors of the Caribbean.  But at least she would be capable of hauling heavy cargo in shallow waters.

Twelve Desperate Miles tells the incredible story of the Contessa’s role in the opening salvo of World War II.  This unremarkable ship, crewed by seamen from twenty-six different nations and eighteen sailors pulled from the Norfolk County jail, became the focus of the first invasion of the war as it was rushed to Virginia at the insistence of George Patton and quickly retrofitted for war.  Too late to join the safety of the massive convoy sailing for Africa, the Contessa set out on her own through the U-Boat-infested waters of the Atlantic to the shores of Morocco, where she faced her final and most daunting challenge: the twelve mile voyage up the shallow and well-defended Sebou River, carrying an explosive cocktail of gasoline and bombs in her holds.

In Twelve Desperate Miles, veteran history writer Tim Brady chronicles one of the great untold stories of the war.  This surprising and entertaining account of the baptism of American forces on the Western Front is a mix of Moroccan intrigue, portraits of some of the great figures of the war (Patton, Eisenhower, Marshall, General Lucian Truscott) at its outset, snapshots of the daily workings of the colorful crew of a merchant ship, along with a thrilling account of the invasion of French Morocco. Twelve Desperate Miles offers a unique and fascinating picture of the war in its opening moments.

Alma and How She Got Her Name