Wings of the Morning 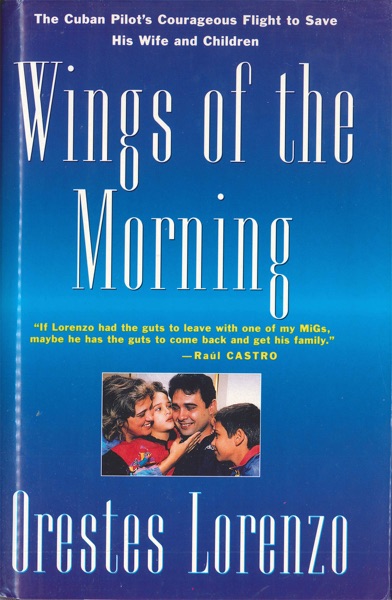 “A moving testament, his narrative provides an insider’s look at the Castro regime’s personality cult, its indoctrination of children and surveillance of ordinary Cubans. ” – Publishers Weekly

In December 1992 Orestes Lorenzo undertook the most daring journey of his life. More than a year earlier, while a major in the Cuban Air Force, he had escaped from Cuba by flying a MiG to the United States, and for twenty-one frantic months had been trying to get permission for his wife, Vicky, and their two sons to join him. When all his attempts to gain their freedom failed, Orestes decided to go back and rescue his family himself. Meanwhile, Vicky had been undergoing a terrifying ordeal back in Cuba, where the authorities were pressuring her to denounce her husband as a traitor. They informed her that she would never be allowed to leave, and that Raul Castro himself had declared: “If Lorenzo had the guts to leave with one of my MiGs, maybe he has the guts to come back and get his family.” Desperate, Orestes Lorenzo did just that, flying an old twin-engine Cessna across the straits of Florida, avoiding Cuban radar, and landing on a busy highway in a breathtaking rescue.

Wings of Morning is Lorenzo’s account of this astonishing feat, but it is also the unforgettable odyssey of a young man growing up during the euphoria of the Cuban Revolution, marrying his sweetheart, and going off to train as a fighter pilot in the Soviet Union. Lorenzo movingly describes his growing disillusionment with communism, his religious awakening amidst the revelations of Perestroika, and the near-death of his beloved Vicky, as well as his increasing conviction that he must not let his children grow up in a country that denies any dignity or spiritual values in the individual, in the family, and to society.